Organized by ISACA Malaysia Chapter and Malaysian National Computer Confederation (MNCC), ISACA/MNCC: IT Governance, Assurance and Security Conference 2011 was held on 22nd-23rd June 2011 at the One World Hotel KL, Malaysia. Representative from ISACA Macao Chapter, President Geoffroy Thonon, was invited to keynote speech titled “Pr[a,e]ying on Trust”. The day finished with a panel of discussion to provoke thoughts on "Social Networking: The Latest, greatest business tool or the Chief Security Officer's nightmare?".

Through the interaction with the Malaysian counterparts for ISACA as well as computer emergency response teams (MyCERT), a closer collaboration and understanding was able to be established to share ideas and synergise efforts for IT Governance, Assurance and Security. 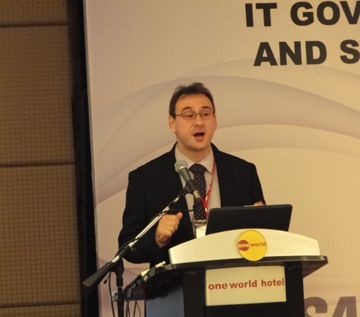 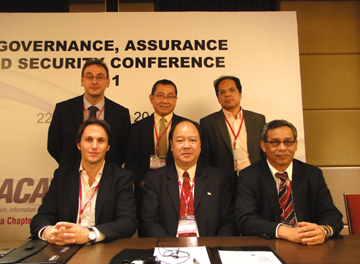 Group picture of Mr. Geoffroy Thonon and other panelists.